Coronavirus curfew starts at 10 p.m. Saturday. Will you notice a difference?


The state-mandated nightly curfew looming for most of the Bay Area on Saturday prompted shrugs, groans of despair and cries for help on Friday.

With most of the Bay Area’s businesses, including restaurants and bars, already shut down by 10 p.m. during the pandemic, most don’t expect much of an impact. And few folks are decrying the loss of nightlife, which has largely been in hibernation since March.

“It won’t affect me,” said Alisha Ponce, 27, a medical assistant who works at UC Berkeley student health service and lives in Antioch. “I’ll just go home and do nothing after work — as usual.”

The 10 p.m. to 5 a.m. curfew starts Saturday night in every Bay Area county but San Francisco, Marin and San Mateo counties, which are so far exempt. San Francisco officials, however, said Friday they expect they will have to join the curfew within days. The curfew, for counties that fall into the purple tier, the state’s most-restrictive category for counties during the coronavirus, is expected to last a month.

During the curfew, non-essential businesses must shut down, restaurants will have to stop serving customers outdoors, though they can still cook up take-out and delivery orders, and all wineries, bars and breweries will have to close. Grocery stores, pharmacies can remain open and travel to and from stores, to pick up takeout and get to or from essential jobs will be permitted. So will walking your dog.

Most non-essential businesses already close well before 10 p.m., but the curfew will hit some late-night restaurants, forcing them to close their patios, sidewalk tables and makeshift parklets early.

“We’re pretty much going to be giving everyone the boot at 9:30 so they have time to get home,” said Jesse Baughman, co-owner of Beta Lounge in Berkeley, which usually keeps its outdoor patio open until 11 p.m. on Fridays and Saturdays. 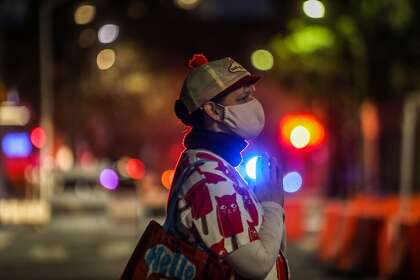 Baughman figures the restaurant, near the Cal campus and downtown Berkeley, will have to close for three or four of its busiest hours. About 70% of its business comes “after the sun goes down.” he said.

Early closures hit particularly hard for restaurants that just had to shut down limited indoor dining after a couple of weeks. And they come during the holiday season when business picks up with festive gatherings before the cold and bleak business drop at the start of the year.

“It’s pretty bad timing,” Baughman said. “But at the same time, I’ve had some family (a great aunt) die from COVID so I understand. You gotta do what you gotta do. It will be hard for us financially but on a human level, I agree with all the measures they’re taking.”

Laurie Thomas, executive director of the Golden Gate Restaurant Association, described the 10 p.m. curfew as “devastating” for many restaurants in the city, especially ones that have leaned into outdoor dining during the pandemic. The timing will change how restaurants accommodate reservations for a portion of their dinner crowds, she said.

“In my opinion, that’s way too early. That means you have to stop seating at 7:30 p.m. or 8 p.m.,” Thomas said. “Why can’t (the curfew) be until 11p.m.? At least you’d be able to sit people until 9 p.m. If it could be moved even an hour later, I think the curfew could still accomplish 80 or 90% of the goal and it would cause a lot less financial damage to businesses.”

Most Bay Area businesses, including restaurants, have already adjusted their hours to close before 10…

Biden is under pressure to forgive student debt. Here’s why it’s a racial issue.

After an unauthorized group trip abroad, 70 Business students have been

Tiger named educator of the year

UofSC expands testing for students ahead of Thanksgiving holiday

School shutdowns border on the irrational

HelloFresh Stock Gets a Downgrade as JPMorgan Sees Post-Lockdown…

With Student-Loan Cancellation That Shouldn’t Happen, It’s Not The…

Yale Study: Vaccine Won’t End Virus On Its Own

Colleges weighed down by dearth of trained student counsellors

Round Rock ISD students fight for teacher to keep her job, hundreds sign

US Rhodes Scholars chosen virtually for the 1st time

For Loved Ones in Long-term Care, Phoning Speaks Volumes

100 years ago, the Globe had the Harvard-Yale game well-covered – The Boston