Despite the stall in Q2, June saw a “burst of mega rounds”, with $1.4bn funding seen in the month after April and May’s modest figures of around half a billion dollars each.

The venture funding in edtech for H1 2022 reached $11.4 billion in total. Last year’s total figure hit $20.8bn, according to HolonIQ, but this year the intelligence platform predicts that overall edtech investment worldwide will be lower, reaching $17.4bn.

Broken down by region, China saw a very heavy fall in the first half of the financial year, with just $0.4bn venture investment compared to the total of $2.7bn in 2021 and the world-high figure of $10.2bn in 2020. Some 25 online education companies closed their business in 2021 in the wake of China’s crackdown on private education, according to Chinese research firm 100EC.

However, HolonIQ described the latest movements as the start of a “long reboot”. 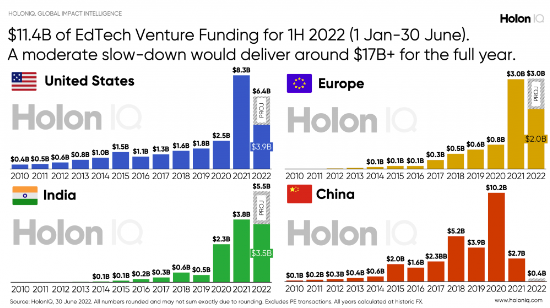 “The US market continues to lead global edtech venture investment as is moderating with a global slow-down,” the report read.

The projected figure for the whole financial year stands at $6.4bn, building on the $3.9bn reported for H1.

“[It is] great to see emerging strength of the EU!”

“Europe’s momentum is holding with more and stronger funding patterns,” it continued. The EU is now predicted to equal 2021’s total of $3bn, two thirds of which it has already hit in H1 with $2bn in investment.

John Martin, board member of Infinitas Learning, Kognity and ILT Education, commented on Twitter that the news was encouraging.

“Europe & India are on track for new highs…[It is] great to see emerging strength of the EU!” he wrote.

India is already galavanting towards equalling last year’s total investment amount of $3.8bn, having almost hit the same level in H1. HolonIQ predicts a total of $5.5bn will be invested in Indian edtech for the whole financial year.

Across the board, the number of deals hit its peak in March at 114, with 93 in May and just 83 in June – but the value of deals in June were almost $1bn more in the previous month.

One of California’s longest-serving superintendents retiring, new one announced