Laing O’Rourke has been lined up to build a huge cancer research facility in Oxford designed by Foster & Partners and bankrolled by American billionaire Lawrence J.Ellison, the world’s seventh richest person.

Proposals for a UK branch of the Los Angeles-based Ellison Institute for Transformative Medicine (EITM), lodged with the city council last month, consist of a complex of buildings spread across two sites and linked by a 250m-long elevated timber walkway.

Ellison, who founded EITM in 2009, has an estimated fortune of $91bn (£74bn) and is the co-founder of the US tech giant Oracle Corporation, the third largest software company in the world.

O’Rourke has been appointed on a pre-construction services agreement and is expected to sign the main construction contract this August, according to documents lodged with planners. 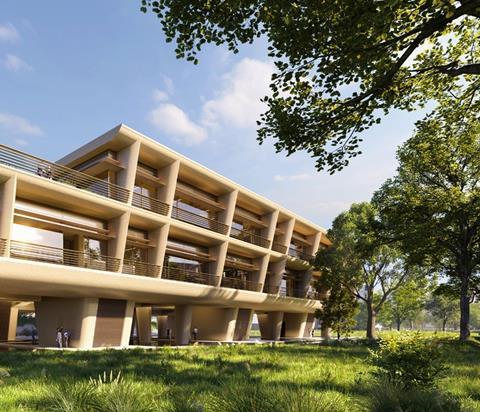 The firm was appointed at the end of last summer before RIBA stage 3 was completed and one source said: “O’Rourke likes getting in early on jobs now. They want a say in the design of the building they’re going to build.”

According to the timetable, a planning decision is expected this May with main works starting on site in July.

EITM describes itself as a multi-disciplinary institute which brings together experts in a wide range of disciplines including physics, maths and engineering to study cancer and develop new ways to prevent, detect and treat the disease.

The Oxford complex will be its first facility outside of Los Angeles and the first of a globally connected cancer research network, according to the planning documents.

It will include two main research and development buildings, a clinic, educational floorspace including a large auditorium and extensive gardens designed by renowned Spanish landscape architect Fernando Caruncho.

Standout elements include a spherical library known as the “collaboration theatre” which will be topped by a double-layered timber geodesic dome that rotates over the course of the day to provide shading.

This will be connected to the rest of the site by the elevated passage, dubbed the “Woodland Walkway”, which passes through tree canopies and over a historic burial ground.

A second geodesic dome known as “the Nest” would be built halfway along the route, functioning as an informal meeting space.

The eastern side of the scheme, where the library is located, occupies plot 18 of the Oxford Science Park, where a £150m scheme by Scott Brownrigg is currently gearing up for construction.

The western half of the scheme is located on a mainly residential area around Littlemore House, a 1902 extension to the grade II-listed former Littlemore Hospital. 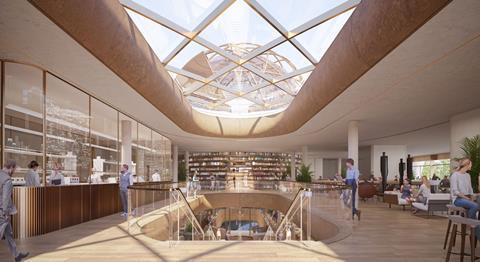 Littlemore House, which is described by Fosters as “plain to the point of austerity”, would be partially demolished and transformed into a restaurant and research space with a new ‘U’ shaped building erected to the south surrounding a courtyard garden.

The practice admitted this would impact the setting of Littlemore House, a non-designated heritage asset, but said the design of the new structure was of high quality and appropriate for the setting.

No impact is expected on Littlemore Hospital because of new housing which has been built between the two sites.

Highlights of the western side of the complex include a “recreation hall” inside Littlemore House which will see the building’s roof reconstructed with timber and bisected by a skylight.

A large atrium overlooking the landscaped gardens will lead into a sunken 250-seat auditorium topped with a “feature ceiling” built directly underneath an exterior water feature and punctured by a series of curved skylights inspired by rose petals. 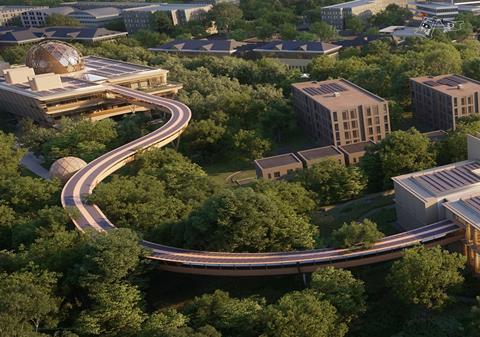 Pictures in the planning application show Foster & Partners founder Norman Foster at a workshop in Madrid with garden designer Caruncho, whose works include the Spanish Embassy in Tokyo.

Pre-application discussions for the scheme started in March last year and continued over the summer, with a public consultation held in October.

And last year, it won a £150m scheme to build a humanities block for Oxford university being bankrolled by US philanthropist and businessman Stephen Schwarzman, the chairman of private equity firm Blackstone.

Panel of scientists has joined research review of Stanford’s president

Explained: How Yale and Oxford can open campuses in India now