Jim Harbaugh and the Michigan Wolverines just lost a big-time top 100 recruit from the Class of 2023.

According to a report from On3.com, 4-star linebacker Raylen Wilson has decommitted from Michigan.

Wilson, who is from Tallahassee, Florida, is currently the No. 73 ranked player and the No. 5 ranked linebacker in his class, according to 247Sports.com.

“I want to thank Coach Harbaugh and the whole Michigan staff for welcoming me with open arms, but at this time I would like to step back from my commitment and explore my options a little more. 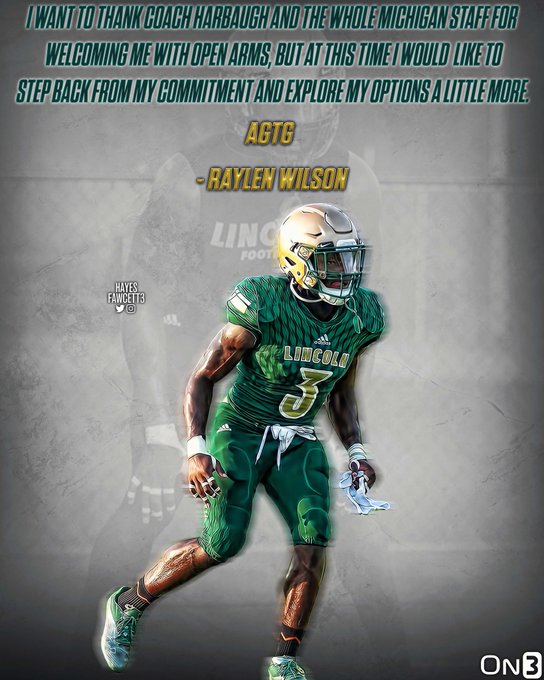 “One of the more athletic linebackers in the 2023 cycle who looks to be an ascending prospect after continued physical development,” On3’s Director of Scouting Charles Power wrote. “Measured around 6-foot-1.5, 215 pounds prior to his junior season. Grew over an inch and added over 10 pounds during his junior season. Also saw improvement on the track, cutting several hundredths off his 100-meter time running a personal best 10.91 mark during the spring. Flashes that top end speed on the field, where he is an eraser in space with sideline-to-sideline ability.”

“Excels in pursuit where he shows the ability to close very quickly. Can track down plays from the other side of the field. A natural in space and shows the ability to cover. Often plays in the box and has experience reading and reacting as a run defender. A high volume tackler with 139 tackles and 16 tackles for loss as a junior. Physical in taking on blocks. Looks to have improved his play strength a bit, but will need to continue progressing in that regard. Father was a wide receiver in the NFL for five seasons and has several siblings who were high level college athletes. Younger for the class, not turning 18 years-old until the July before his freshman season in college.”

Losing Wilson is obviously a huge blow for Michigan, which has already struggled to recruit the 2023 class.

Have you subscribed to our YouTube Channel yet? Subscribe and hit that notification bell to stay up to date on all the latest Detroit sports news, rumors, interviews, live streams, and more!

University of Michigan: Researchers identify hormone from fat cells that

Michigan Football: 2 newcomers who’ll have the biggest impact in 2022