With a day off for Queen Elizabeth II’s funeral, some NYU London students attended the event in person. 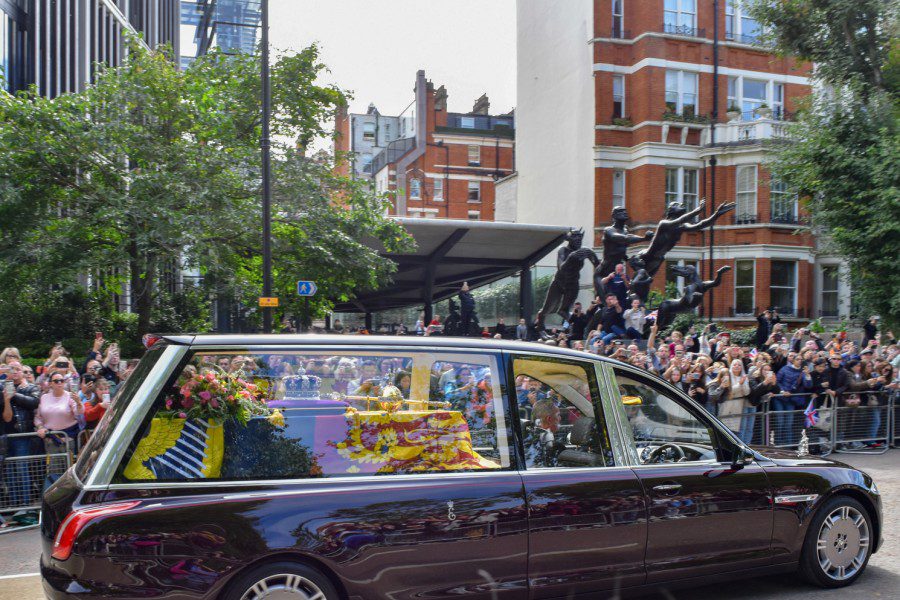 Queen Elizabeth II’s funeral took place on Sept. 19. The queen’s coffin was transported by the state hearse and started in Westminster Hall to Westminster Abbey. (Ryan Kawahara for WSN)

Following her death on Sept. 8, Queen Elizabeth II’s funeral was held in London on the morning of Sept. 19. The day was designated a national day of mourning and a bank holiday throughout the United Kingdom, leaving everything from gyms to restaurants across the sovereign country closed. In addition, NYU London’s academic center, dormitory cleaning services and residential life office also closed as students received an unplanned day off from classes.

While most NYU students slept through the morning, a few used the day as an opportunity to witness the funeral in person. Among the crowds of British mourners and viewers, students traveled to Hyde Park by foot and train.

CAS junior Luigi Auquilla woke up at 5 a.m. on the morning of the funeral to commute to a viewing spot in front of Westminster Abbey. However, he ended up leaving later when he heard about the crowds at Westminster Abbey, leaving no space to view the procession by 8 a.m.; even when entry reopened later, it was still very crowded. He headed to Hyde Park with his roommate around 9 a.m. for the procession scheduled at 1 p.m.

While Auquilla was not able to see the casket travel to Westminster Abbey, he was able to see its journey leaving London. Though he thought the procession was cool, he was left a little unimpressed by the whole affair.

“Most people were indifferent, but it was cool to see something. We talked to this one woman who drove five hours from Manchester to see the procession,” Auquilla said. “She didn’t think it was worth her time.”

Tisch junior Kam Kampton also dedicated his day to the funeral, and traveled with his British suitemate to the viewing screens at Hyde Park. Kampton left at 9 a.m. and decided to walk, not trusting public transit on a day with heavy crowds and unexpected closures.

“There were officers conducting the pedestrian traffic and leading us to Hyde Park where the screens were,” Kampton said. “It was like watching a live stream with these massive screens and speakers and tons of people.”

Overall, Kampton said the event was pretty quiet and serious. Due to school being canceled for the day, there were many families with young children in attendance.

“I thought it was interesting to observe the perspective of the British and the public in general,” Kampton said. “As an American, I can’t understand the feeling of having a monarch. It felt absurd. I kept asking, ‘Is this for real?’”

Along the roads, vendors also sold flags, flowers and commemorative booklets. For many NYU students, the event helped them gain further understanding of the country and history.

“I was happy to have gone for history’s sake,” Kampton said. “I would have regretted it had I done nothing.”

While many NYU students in attendance didn’t necessarily experience the emotional connection many native British people and Londoners felt on the day of the funeral, there was something else for them to celebrate.

“It was good to go,” Auquilla said. “Though, I’m mostly just happy about the day off, if I’m being honest.”

Nevertheless, NYU London students won’t get off completely scot-free. Their missed day of classes is scheduled for Dec. 9, the Friday before finals begin.