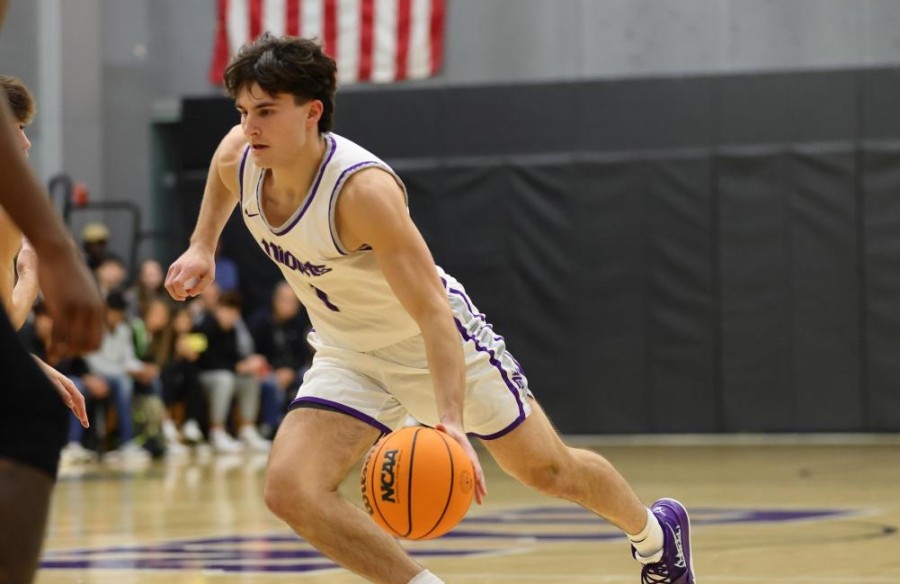 In a back-and-forth battle, the NYU men’s basketball team managed to defeat the SUNY Old Westbury Panthers 91-77 for its sixth straight win in Brooklyn on Monday, Nov. 28. Guard Michael Savarino finished with a career high 24 points, and Spencer Freedman registered a double-double with 23 points and 13 assists.

While the win puts NYU at a very solid 6-0 start on the season, the game showed the team’s first signs of struggle. For the first time this season, NYU did not lead at halftime. The Violets scored the first points of the game, but the Panthers later brought the score to a 9-9 tie.

NYU continued to maintain a slim lead for the majority of the first half. With just under six minutes left to go in the first frame, SUNY Old Westbury took the lead 31-30, and then went into halftime with a 41-39 advantage.

With five ties and six lead changes, the game continued to be hard-fought for the vast majority of the final half. Tied 67-67 with just over six minutes left to play, Savarino drilled a 3-pointer to give the Violets the lead, and the team did not look back. NYU ended the game on a 21-10 run to finish with a 91-77 win.

In many of the previous games this season, 3-pointers were wide open and head coach Dave Klatsky emphasized they would take the shot if it was available. But on Monday, one of the greatest keys to the Violets’ late success was their ability to start to shoot layups rather than just threes. However, they still did end up attempting 40 from the line — scoring 15-40. In five of their total six games, NYU has attempted more than 35 threes. The team also shot 32-69 from the field.

SUNY Old Westbury’s size advantage proved to be significant throughout the game for the Panthers as they outscored the Violets 42-32 in the paint. NYU’s ability to overcome this, however, showed great promise for the remainder of their season, as matchups get more difficult.

In the game, Savarino shot 8-13, including 6-11 from the 3-point line, for his career-high of 24, and tallied four rebounds, a block and a steal. In his third 20-plus point game this season, Freedman went 7-11 with 5-8 from deep. With a career high 13 assists, Freedman earned his first career double-double. He also managed two steals.

Sophomore combo guard Zay Freeney put up 16 points after recently being named the University Athletic Association’s Athlete of the Week. Senior combo guard Nikola Lipovic scored 10 points in his first start of the season, and Quinn Clark was two points and one rebound away from a double-double at eight points and nine rebounds.

The Violets head back to the court this Thursday, Dec. 1, and host the defending Skyline Conference champion Yeshiva University at home at the Brooklyn Athletic Facility, with tip-off scheduled for 7 p.m.