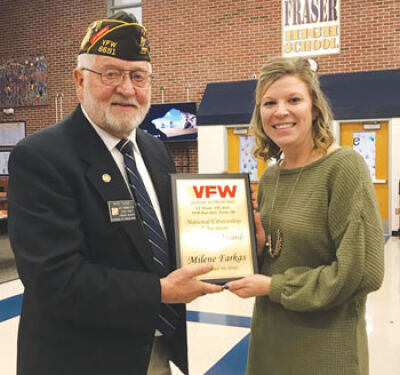 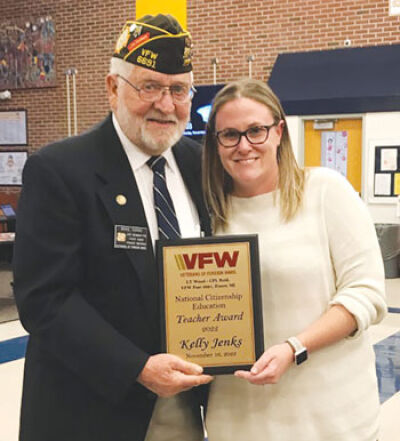 Kelly Jenks, a sixth grade teacher at Salk Elementary, is recognized for her work in promoting education about veterans matters and civic responsibility. 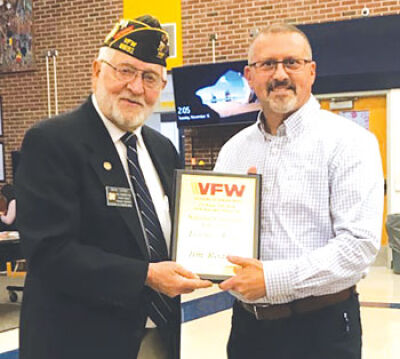 FRASER — Three Fraser teachers were recognized by the Veterans of Foreign Wars on Nov. 15 for their efforts to incorporate patriotism and civic responsibility in their lesson plans for students.

The educators were each given plaques, a certificate and an award of $200 during a ceremony at Fraser High School.

“These awards are for teachers who exhibit extreme patriotism and Americanism. We’re proud to have our three nominated teachers be awarded on behalf of our post,” said Mike Sand, the public information officer for Fraser VFW Post 6691. “We’re happy to recognize them.”

“Mr. Rodgers is the band instructor, and he’s marched in parades with us several times in the past,” said Sand. “We just had the jazz band at our Veterans Day ceremony. Ms. Jenks has just participated with her students in our Patriot’s Pen and Voice of Democracy programs. Milene is bringing up her students so the next generation can recognize the importance of patriotism, as well.”

Sand said that they wanted to recognize teachers who are able to find interesting and creative ways to teach students about America, veterans and the importance of civic matters.

“We get nominations for our educators. We speak to the community, talk to fellow staff members, and I personally know several of the teachers through the VFW post,” he said. “We look for educators who do things like teach flag etiquette, incorporate patriotism into their classes and promote civic responsibility.”

Farkas said she was very surprised to have been given the award but was happy her work is being recognized.

“I was shocked to receive this award but very excited,” she said. “I felt very honored. I wasn’t sure how it came about so when I received the email I played it off for a second, but when I spoke with them, I was really happy. I feel I have worked really hard to form a relationship with my kids, and I do my best to have a classroom family.”

She said trying to communicate such adult concepts to young children can be difficult, so it helps to start with the basics.

“We say the pledge every day,” Farkas said. “We talk a lot about communities in the second grade, and we try to incorporate that as much as possible.”

Jenks described the award as very honoring and humbling.

“It’s a great honor because we’re supposed to honor our veterans,” said Jenks. “We don’t expect them to come back and honor us for things that we do. We appreciate each other, and it’s great to see your community work together and foster that patriotism in kids. We want to teach them to be kind to one another.”

Jenks tries to engage her students to get them thinking about concepts such as patriotism and tries to arrange for them to speak to actual veterans so they can hear about their experiences.

“I start at the beginning of the year with the Patriot’s Pen essay contest through the VFW. We hit hard on a lot of topics like patriotism and civic duty. The veterans reach out to our kids and get involved in the classroom, and I think this motivates the kids. Once they have those relationships, they write letters to veterans,” she…

The Stranglehold of Technology in the Classroom

Cost of living crisis: Teachers in England report increase in children who…

‘Akron Public Schools are not safe’: Teachers sound alarm after another…

Primary school teachers in Sarawak have no problem teaching Science, Math in